Waterlight Project team member, local historian, conservationist and Secretary of the Melwood Conservation group Bruce Huett highlights the environmental issues associated with local chalk rivers and the importance of a consultation on the new local plan.

I would like to draw your attention to the local plan framework that is currently out for consultation. Unfortunately, this has not been widely publicised and the consultation period ends on the 24th of February. You can access the documents and post your comments at Greater Cambridge Local Plan website.

As someone very concerned about our local environment I would encourage local residents to contribute their thoughts on how the local plan could help to preserve our precious local environment, especially our chalk streams.

Councillor Lewis Herbert, leader of the city council has said sustainability of water supply would be addressed in the next local plan. I suggest that the most significant areas for comment are the ‘Choosing our big themes’ and the ‘Biodiversity and green spaces’ sections, although obviously the climate change section is also relevant. In fact there are opportunities to comment environmentally under most headings.

The consultation gives you the opportunity to influence the priorities that the planning authorities will take into account when preparing our local plan.

Local plans are prepared by the Local Planning Authority. In this case all the Councils in Greater Cambridgeshire are involved. They provide a framework for addressing housing needs and other economic, social and environmental priorities. Note that the primary consideration is housing needs.

The last local plan for this area was initially rejected by the national inspector partially due to a failure to fully implement government housing targets. It had to be revised.

It is therefore important that, at this stage, as many people as possible actively take part in the consultation to stress the importance of consideration for the environment in contrast to environmentally dangerous development.

The most important document you’ve never heard of?

A desire for sustainability is part of the considerations, but I wonder if this isn’t ‘greenwashing’ as it is certain that the pace of house-building will increase and could even double. There was a good article in the Cambridge Independent on 23rd September 2019, summarising their understanding of the framework for the plan. The final plan is expected to be agreed in 2023.

The councils have described the document as: “the most important document most people have never heard of” and say it will shape “where homes will be built, new jobs located, what education facilities are needed and how people can get around”.

Greater Cambridge had 117,000 homes in 2017, and there are already plans in place for an additional 36,400 homes by 2040. However, to meet the council’s commitments under the wider Cambridgeshire devolution deal, an additional 30,000 homes may be needed in the same time span. Forecasts suggest that Greater Cambridgeshire may need to increase its rate of development from the 1,675 homes a year already agreed to last until 2031, to 2,900 homes a year from now until 2040.

All of this development will have a serious effect on the environment if not carefully planned. Unfortunately, fully taking on board environmental considerations increase the costs for developers so, unless the plan is forceful on ensuring that these are robust, they will be avoided.

A talk recently at the Cambridge Natural History Society by Ruth Hawksley, water expert for the local division of the Wildlife Trust, highlighted the poor state of the local chalk streams and how these could be very adversely affected if the development plans do not take full consideration of the water supply requirements and require sustainable water systems, as at Eddington (a new development on the outskirts on Cambridge).

The key issue is that the streams are dependent on water that percolates through soft chalk. This provides the very pure, mineral-rich water characteristic of chalk streams and supports their rich biodiversity. The springs emerge when this water meets the hard chalk base through which it cannot penetrate. With dry periods and over-abstraction, the permeable chalk dries out. Like a dry sponge, it then takes a lot of time — with a period of steady rainfall — to get replenished. During the dry period the river levels and the flow both fall and this deposits silt, which harms the flora and fauna, particularly the invertebrate population — the basis of the food chain leading to the trout, otters and egrets. It also concentrates harmful chemicals and sewage discharges (because of the nature of the landscape, Cambridgeshire has many small sewage farms discharging into chalk streams rather than larger ones where sewage treatment is more effective).

In 2019 Environment Agency classified the River Cam’s flow rate as the lowest recorded since 1949. In fact, the plight of the English chalk streams (over 60% of the world’s chalk streams are in England) is becoming an important issue, with prominent figures such as Feargal Sharkey (the former lead singer with the Undertones) championing their cause. He has said: “The Cam and the Granta, we have discovered, are in the process of drying up simply because the whole area is over abstracted. We have taken too much water out of the aquifer (water table) that feeds the springs that generate these rivers. Now these rivers do not have enough flow to survive.”

Others have highlighted the fact that trees planted to assist with climate change amelioration require water. There have been articles in the Guardian (July 2014, December 2018 and August 2019) and the BBC has mentioned it, for instance in a Countryfile programme in 2019 and on the local East of England news in July 2019. In Cambridgeshire, the Cam Valley Forum issued a manifesto highting the issues (available via our Links page) and Cambridge Councillor Katie Thornburrow convened a seminar in November 2019 — the report is available here. 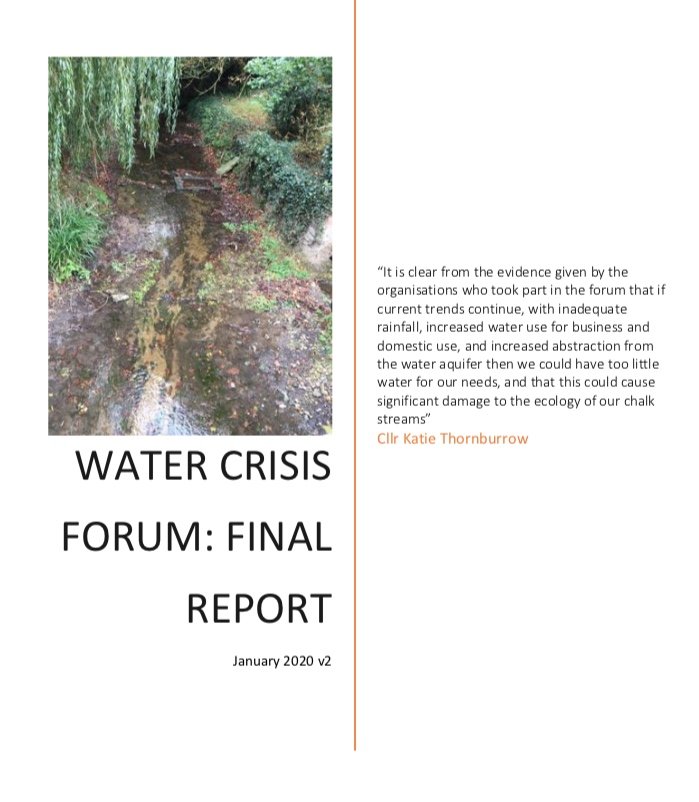 The Mel itself has been affected by these issues and the flow in late autumn was so low that you could walk across it in wellington boots near the source. I visited three other Cambridgeshire chalk streams in 2019 that all were completely dried up. At Little Wilbraham the local river action group organiser said that she had never seen it so dry in the thirty years that she had lived in the village.

We hope that, as we move forward, we can ensure that the Mel will survive and continue to provide a wonderful place to enjoy the natural environment for ourselves, our children, grandchildren and future generations.

This site uses Akismet to reduce spam. Learn how your comment data is processed.

The latest posts on the Waterlight project blog