On Monday 10th January 2022, after a substantial fish and chip lunch (sadly not Mel trout!) at the Old Bull Inn, Royston, about 30 members of this ladies group settled back to enjoy the Waterlight film. They watched very intently, without any wavering of attention, and enthusiastically applauded at the end. They obviously enjoyed it. Several members were not aware of the river or the footpath along it and now intended to walk it and experience some of the magic that the film captures.

In his introduction, Bruce Huett stressed the dangers that the river faced from abstraction, climate change and sewage discharges. He encouraged members to respond at each Local Plan consultation stage to ensure this biodiverse landscape was not lost by overdevelopment.

Nigel Kinnings was also present to answer questions and DVD copies of the film were sold.

Bruce was delighted to get information on additional springs that arose in Melbourn in the moat of the old manor site at Lordship Farm and also accounts of regular flooding in the area.

Thriplow screening of Waterlight – portrait of a chalk stream

The Waterlight film was shown again on Thursday 14th October 2021, this time to the Thriplow Village Society. As the village is close to Melbourn the group were very interested in the future of local chalk streams and the local campaign by Cam Valley Forum to restore them in Cambridgeshire.

The film received many compliments and there was an interesting discussion after the film in which they talked about the stream that used to run through the village to link to the Hoffer Brook, but is now dried up.

Meldreth screening of Waterlight – portrait of a chalk stream

The first Meldreth showing of the film was to the local WI in Meldreth Village Hall on Thursday 12th March 2020 at the WI AGM in the evening.

Bruce Huett introduced the film and responded to questions.

The film was well received and Bruce enjoyed chatting over tea and cakes after the showing and hearing the members describing the fun they had had in and around the river when children.

They were very appreciative of the work done by the River Mel Restoration Group to improve the river, but also commented that it was now much less deep.

You can view blog posts, films and other content from our previous events with local people:

The Mel is a South Cambridgeshire chalk stream which has inspired a film based on poems by Clare Crossman. Waterlight captures the essence of the river: its history, rich wildlife, conservation activities and memories and reflections of local residents. The film has been praised by local conservation groups and already been enjoyed by over 300 people at local showings in Cambridge and surrounding villages.

On 19th November 2019, Cam Valley Forum and Cambridge Conservation Forum hosted a showing of the Waterlight film in Cambridge — with talks, poetry, river-related folk music and a panel discussion. 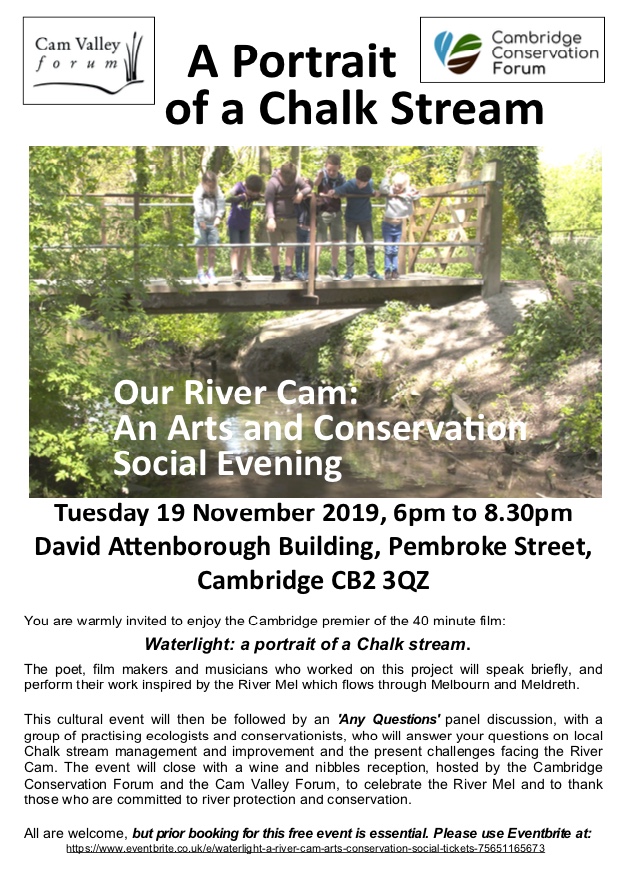 On 25th July 2019, we presented the first public screening of the Waterlight film at a crowded Community Hall in Melbourn.

On 13th June 2019, over fifty people crammed into the upper room at the Plough in Shepreth for a special invitation event, to watch the first showing of the Waterlight film.

On 8th March 2019, we were joined at the Hub in Melbourn by folk singers and musicians Penni Mclaren Walker and Bryan Causton, and poets and novelists Kate Swindlehurst and Jackie Watts in a special Waterlight concert to celebrate the river Mel in words and music.

A walk along the river Mel with local schoolchildren

On 23rd May 2018, poet Clare Crossman, local historian and conservationist Bruce Huett and filmmaker James Murray-White accompanied more than 30 Year 6 children from the local primary school, with their teacher, Mrs Willan. Together, we went for a walk along the river and some of the children made these films…

On 21st September 2018, Clare led a poetry writing workshop at the Hub in Melbourn. Here are some of the poems the participants wrote, inspired by the river Mel.